ALL ABOUT THE 1ST  EUROPEAN FORUM 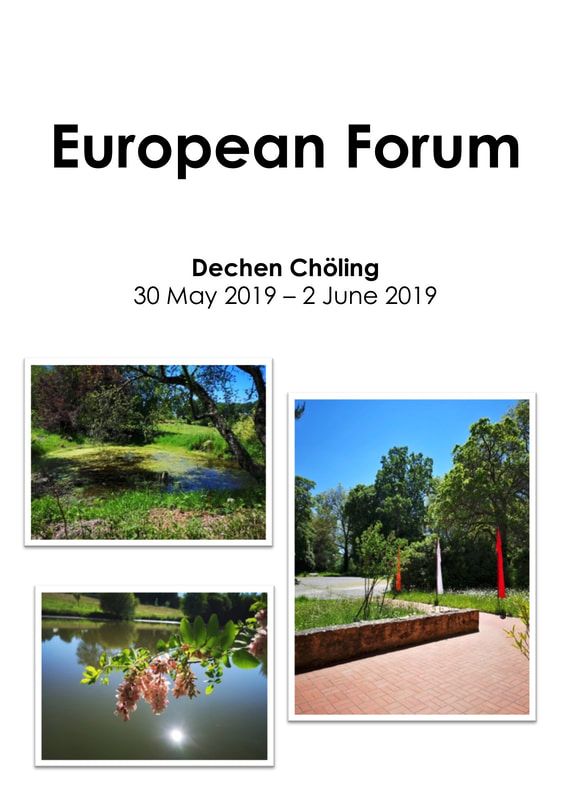 This gathering is open to everyone who is interested in engaging with the future of Shambhala, relaxing into being together, and celebrating as a community.
At this pivotal time for Shambhala we are challenged to see more clearly what our innermost values are, as individuals and as society. And we have the precious opportunity to ask ourselves, what we want to bring forward to uplift each other, how we can enrich our world and what support we can offer. As Europeans in Shambhala many of us have been longing for a common and diverse European identity.

In 2018 the idea of having a European Forum started to grow in some peoples minds and hearts. The European regional directors and coordinators – ERDC – are excited about going forward with this idea and Dechen Chöling is auspiciously supporting and hosting this European gathering.


For 2 days we will be exploring how to now manifest the Shambhala principles of basic goodness and enlightened society; we will have conversations and heartfelt exchanges that are meaningful and fun.We will create a welcoming and safe practice container. In doing that, we are strengthening our European identity.

We will reach out to the process team and our outcomes will be communicated and offered to them.It is an honour to journey together with you.

In the Vision of Enlightened Society,
The European Regional Directors and Coordinators – ERDC
First European Forum in Dechen Chöling

From Thursday May 29 until Saturday June 1, 26 European Shambhalians from all directions gathered in Dechen Chöling for the very first European Forum.

The first seed for this meeting was planted at the Kalapa Garchen in 2017 where the European representatives met and expressed their feeling that a European meeting, in Europe, would be very enriching.

In 2018 during the German regional meeting the idea of a European Forum was born.

These two ideas were brought together by some of the European Regional Directors, along with the much-appreciated support of Dian Marie Hosking - a member of the Steering Committee of the Process Team . For those who needed financial support an Offering Bowl was set up and also the European Treasure Council helped financially to make this meeting happen.

The organisers vision was to make this gathering a ‘meditation in action’, and - with support of formal practice, “Sadhana of Kindness”– to assist participants to have the conversation they needed and wanted to have, about the subjects that were important for them in a way that they choose to do. A ‘minimal structure’ was carefully designed to provide a safe and supportive container for these conversations.

Talking circle: Why are we here; what motivates us?
After the usual introduction of Dechen Chöling the participants contemplated the question what made Shambhala so important for them. Why they had travelled and made costs to be present at this Forum. What had touched them in Shambhala and why did they care so much for its future?
Answers were very diverse. To mention a few, some were drawn in by the warmth, openness, acceptance, challenge, genuineness and freshness they found in Shambhala. Others talked about their connection with both Sakyongs. Another group mentioned the preciousness of the Shambhala teachings of basic goodness and enlightened society and how important these are (although manifested in an imperfect way) in a world dominated by aggression, money and power.

Pair Work: Getting to know another in their variety and complexity.
After the circle participants were invited to pair up with someone whom they did not know. They were asked not to speak about the issues in the sanga but, rather, to speak about themselves so as to get to know each other as human beings. The sleep many of us longed for after a long day of traveling made us end this first evening early, to get up fresh the next morning for the lhasang.

A lhasang and the practice of Sadhana of Kindness laid the ground for the continuation of our meeting.
Circle: Who is in the room?
Each person wrote on an A4 sheet, their name, country, role(s) in Shambhala, and other identities they felt they brought with them. Standing in a big circle, participants were invited to walk to the front in response to questions such as: who here is a center director? Who is member of the dorje kasung? and more personal questions such as: who here is a child of divorced parents? And other intriguing questions...In this way, we learned a lot about who was present. After this, we all arranged our sheets on the floor in a map of Europe - which clearly showed the painful absence of some regions, mostly from the more Eastern parts. This laid the ground for the felt need to have a second Forum in that part of Europe.

Articulating aspirations and generating agreements: How do we envision these two days?
The organisers re-stated their view of the Forum as ‘meditation in action’ and, in this context, the importance of generating ‘skilful means’ for collaborative working. They further outlined their aspiration to empower participants to have the conversations they would like to have. With this in mind, participants were asked to generate some agreements about HOW they wanted to work together. A few agreements were: to work with ‘fearless expression’, ‘appreciating diversity’, ‘taking responsibility’ and not ‘to freeze windhorse into ice’. An outline of the ‘minimal structure’ for the two days was also shared (flipover) and a conversation initiated about recording and harvesting and the agreements we wanted to make about that (who, how, sharing with whom? photos? etc).

Visualisation: “Imagine it’s now the end of the forum; for you, it was fabulous… what made it so?
Individual contemplations were followed by sharing in groups of five; groups then identified the themes and summarised them on flipovers. Again, this allowed us all to have a sense of what needed to happen and how. Emergent themes included:  We would ‘feel inspired, confident, positive about practice, connection and motivation’,we would have ‘been open to pro’s and cons of different opinions’, we would have ‘found practical support for Dechen Chöling’ ‘would have had space for our pain, fear, worries, feeling uncomfortable, sadness and anger’, we would be happily surprised discovering the reality of the European mandala.

Storytelling (Tales from the field)
After lunch and sitting, a brief introduction to story telling was given, emphasising the qualities of ‘telling from your experience’, in rich (multi sensory) detail, no ‘right/wrong’, and deep listening.  Groups of five were formed with rotating roles of speaker, listener, and observer. Each person, in turn, told about the situations they experienced e.g., in their center or group and how they felt. Each group prepared a flipover to summarise the core themes.  A plenary space was made for Dechen Chöling since it is our European centre. Konstanze (the CEO) spoke about the financial and emotional problems. From the other groups came themes such as: ‘tiredness from dealing with the drama of the situation’, ‘overwhelming workloads’, ‘feeling of isolation’, ‘hard time to magnetize people’, ‘painful that friends are leaving’, cat walking around the hot porridge’.

‘Omdenken’ (Dutch for ‘looking from a different perspective’.
A plenary conversation was held, back in our talking circle.  Participants were invited to reflect on their stories and e.g., whether they now thought, or felt, differently. A brief connection was made to letting go, to shifting from problems to possibilities, to re-storying… One of the groups already wrote down that ‘Crisis is opportunity’. Also, in other groups similar sounds were heard, ‘Finding our inner motivation’, ‘connection brings magic’, a family feeling in a meeting like this’, ‘waiting is not going to work’.

Group 1. Trust and accountability in understanding misconduct and starting a process.
Group 2. How the community and the Sakyong can re-unite in an inspired way?
Group 3. Feedback
Group 4. Future of DCL
Group 5. Suggestions and creative ideas for change
Group 6. What does the world need (from the kasung)?
Group 7. Opening the forbidden

This was an exercise in imagining, using all the senses, and in as much detail as possible, how your group, centre, region, land center… manifests as Enlightened Society.  Participants were asked, also, to reflect on what concrete actions were needed in the next six months to get this going. Groups were invited to present their vision in any way they wanted. This invitation resulted in a mix of improv theatre, serious stories, humor, prose and song. The lungta level was raised.

In a circle, we discussed how we would share what we experienced with the larger community. Many options were mentioned. We also talked about the desire to have a second European Forum, preferable in Eastern Europe. In later communications the `the beginning of 2020 was mentioned.

Next everybody was invited to write for him/her self in a notebook the concrete actions – as a result of this Forum - (s)he will take in the first coming period. Further agreements were made about harvesting and sharing and producing a report.

Reflecting and looking back how these two days went (returning to our flipovers: agreements about how we will work, imaginisation of a fabulous forum; see earlier) produced  a wide variety of reactions including both great appreciation and the feeling of going home with renewed lungta and inspiration and disappointment that not more concrete steps had been generated. Many felt that we did not have enough time.

The festive banquet was in the style of a tradition that knows how to appreciate and celebrate. With many thanks to Dechen Chöling and its staff who hosted the European Forum so generously.

Keep this movement moving
These few days were a beginning. We hope a beginning of a fresh start. With this vision in mind we invite and encourage all 7 groups who gathered and had a conversation during the Open Space Technology, to continue their conversation. And to commit to a concrete action (small or big) to make the change they would like to see in Shambhala; if possible, within a concrete timeline. A good way to start would be that the conveners bring their group together again in one way or another.

We, the organizers Konstanze Brockstedt, Dian-Marie Hosking, Grit Turnowsky and Fred van Welsem were very clear that we wanted to create a structure where participants of the European Forum felt empowered and could talk about the topics they wanted to talk about, could connect with each other and (re)connect with their inspiration, lungta and the magic of Shambhala. If participants bring this feeling back to their centers and groups, we feel we have succeeded. Of course, there were also expectations that were not fulfilled. Big organizational steps were not made. But ‘small steps count’. And real changes start in our heart and mind.

1. What have you learned from this situation?
2. What is your vision for the future?
3. Sakyong shows bravery in giving a further more complete apology to sangha – and individuals as well (in private) (There are good sources for learning about this). This will shift everything.

What have we noticed? What ideas have emerged ?